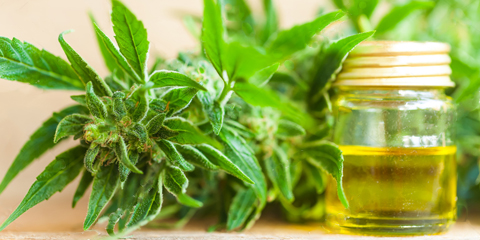 Cannabidiol (CBD) is one of more than 60 chemical compounds found in cannabis. These chemical compounds are collectively referred to as cannabinoids. CBD is the second-most abundant cannabinoid in the cannabis plant, after tetrahydrocannabinol (THC). THC is the main psychoactive cannabinoid found in cannabis, and is responsible for the “high” that users feel when cannabis is smoked or consumed. CBD, on the other hand, is non-psychoactive and provides a wide range of health benefits.

CBD is emerging as a powerful natural supplement with anti-inflammatory properties and has the potential to help a number of medical conditions. It has recently gained popularity for its many therapeutic and healing properties. Studies indicate that CBD can help alleviate anxiety, pain, seizures, cancer, and more.

Along with THC, CBD is the most well-researched of the cannabinoids. CBD can be used in combination with THC to counteract THCs mind-altering effects. It is not to be confused with THC, as they are both different compounds. Researchers suggest that CBD can influence the body into using its own systems more effectively.

When CBD is consumed, users do not experience any sensations associated with the “high” that stems from the component THC. This is a very important trait of CBD from both medical and legal standpoints. Being able to utilize the benefits of cannabinioids without any psychoactive effects is important for those looking for an effective, daily remedy. Because CBD is different from THC, there are different legal obligations to adhere to. CBD is legal for use as long as the products THC levels do not exceed 0.3 percent. This means that CBD can be an effective and legal remedy for many individuals.

Where Does CBD Come From?

CBD is derived from the cannabis plant. Cannabis has two main commercial varieties – marijuana and hemp. Marijuana contains THC, and is the variety that gets you “high” when consumed. A growing number of people consume it for its medicinal properties, but it is also used for recreational purposes. Hemp is the variety that is grown for industrial purposes, and has an extensive array of uses. Hemp is commonly used to create items such as clothing, paper, food, and even fuel. Recently, it has been bred to contain higher concentrations of CBD. Hemp is quickly becoming the main source for CBD as a result.

CBD is extracted from cannabis using a variety of methods. Once extracted, CBD is infused into many types of products such as oils, tinctures, topicals, vapes, edibles and more. Most of the CBD products you find on the market will have been derived from hemp. Hemp is legally cultivated throughout the United States and other areas of the world.

A general consensus suggests that CBD derived from marijuana is more potent and more effective than CBD derived from hemp. Many attribute this phenomenon to the “entourage effect,” a theory that states one cannabinoid can have more powerful results when working together with other companion cannabinoids. Buds from marijuana plants have a richer and wider complement of cannabinoids compared to hemp plants. But, because hemp has a lower concentration of THC, it is more ideal for producing CBD-only products.

While both plants are effective, only hemp is federally legal, whereas marijuana may face more challenging legal issues. Simply put, the source – marijuana or hemp – matters.

How Does CBD Work?

CBD works by interacting on a regulatory system in our bodies known as the Endocannabinoid System (ECS). This system consists of naturally-produced cannabinoids and cannabinoid receptors and is involved in regulating a number of physiological and cognitive processes such as sleep, appetite, mood, pain sensation and memory. The goal of the ECS is to help maintain and regulate homeostasis (optimal balance) within the body, making it possible for us to enjoy CBD’s therapeutic benefits.

CBD interacts directly and indirectly with various receptors to produce therapeutic effects. These receptors include CB1 and CB2 receptors (the main receptors of the ECS), as well as serotonin, vanilloid, adenosine and GPR55 receptors. Because cannabinoid receptors are found in so many places in the body, they are crucial for optimal health.

CB1 receptors of the endocannabinoid system are abundant in the central nervous system, while CB2 receptors are often found on immune cells and in the gastrointestinal tract.

In addition to the functioning CB1 and CB2 receptors, the body actually produces some cannabinoids on its own, called endocannabinoids. When these receptors are activated, they permit two-way communication between body systems, ensuring proper function of everything from mood to memory.

Another way CBD works is by deactivating (rather than activating) receptors such as GPR55. When activated, GPR55 promotes cancer-cell proliferation. Since CBD seems to block or deactivate GPR55, it is believed that it has a positive effect on cancer prevention and treatment.

What are the Health Benefits of CBD?

Due to the persecution of hemp and cannabis in the last 80 years, most people living today have gone their entire lives without utilizing the raw benefits of CBD. Bringing the body back into harmony could be as simple as replacing this lost nutrition.

While research is still in its early stages, numerous studies indicate that CBD may help with the following conditions and their symptoms:

How is CBD Consumed?

CBD is consumed in various ways depending on preference and purpose. It can be eaten, inhaled, taken sublingually, and applied topically. Common forms of CBD are oils, tinctures, salves, creams, lotions, vapes, edibles, and beverages.

The most common ways to take CBD are to simply swallow pure CBD oil, or hold it under your tongue for a short period. Sublingual application allows a direct absorption into the bloodstream. When you ingest CBD oil, it passes through the digestive system and is metabolized by the liver, eventually delivering its active compounds to your bloodstream.

Over the past year, vaping CBD has grown in popularity among health-conscious consumers, as it offers a lung-friendly method for inhaling CBD oil, allowing CBD and other trace cannabinoids to be absorbed through the lung’s large absorptive surface area before they’re diffused into the bloodstream.

You can even mix CBD with your favorite food or drink, rub it on your skin, or use it to wash and condition your hair.

How Can You Obtain CBD?

CBD is sold legally throughout the United States and in numerous countries throughout the world. It is typically sold as a nutritional supplement, and you can obtain it without a prescription or medical recommendation. It can be purchased through online and offline retail stores, drug stores, pharmacies, CBD stores, and select stores that specialize in hemp.

CBD products can vary significantly in terms of quality, effectiveness, and safety. It is important to select a reputable brand or store when buying CBD products.

Daintri is an online retailer that curates high quality CBD products that meet stringent levels of superiority and safety. Daintri takes the difficulty out of finding the right CBD product for your needs by curating the best products on the market. Made from pure and potent CBD sourced from premier hemp producers, these products are specially created to deliver the best possible health effects.